Hi everyone!
I’m finally back from South Korea, the trip was beyond great and I really don’t know were to start!
We saw so many different things so I’ll just make a list of them 🙂

– Traditional Houses and Villages –
the houses are in a U shape, knowing that man and woman are separated and have their own house and courtyard.

The Gyeongbokgung Palace in Seoul is build on the same principle. 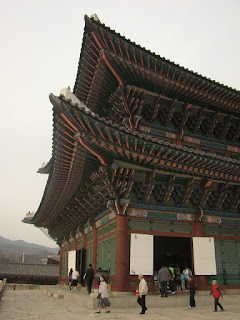 – Temples –
we saw different ones, but the absolut best one, was our “temple stay”, when we slept in the temple of Songwangsa! We did two Buddhist prayers which were just breath taking.
The ceremony begins with a monk which drums on a huge round drum. This first drum is to wake up all the spirits living in the air and on earth. The drumming is quite long and really beautiful to see. Then another monk hit a huge bell which wakes up those living in the earth. When hitting the bell everyone goes in the temple to pray. A last wood fish is hit by a monk to wake up all those living in the sea.
We did two prayers, one at 6:00 pm and one at 3 am (yes you read right :D).
We “slept” in a common girls room/boys room “à la coréenne”, directly on the heated ground ( 35°C in the girls room 50°C in the boy’s room!!) 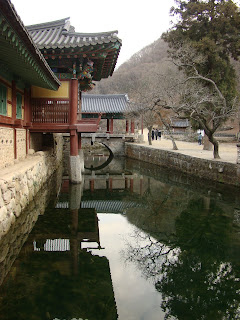 – Huge Seoul –
Everything is huge in Seoul, at least for a European. You have enormous buildings, and 10 times the same when it comes to dwellings! The roads have 4 to 6 ways and the river, hangang is more than 1 km wide in Seoul!!
One of the most popular district in Seoul is the myongdong, which counts 1 million persons coming there per day! 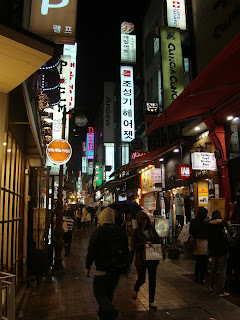 Ok, that’s it for now, I should translate this in French, but it’s alread 2:00 pm and I’m really busy 🙂
If you would like to see more photos of my trip:
Korea 1
Korea 2

Hey folks! So we moved in our grandiose new place last week 🙂 We carried boxes, boxes, some more boxes and also […]

What an interesting post, huh?And that’s how I was before:I was really fed up with my long hair 🙂